On May 24, 2010, at 1430, H.E NOE A. WONG, the Philippines Ambassador, Gen Jose Magno, chairman of Philippines Cambodia Business Council (PCBC) and his delegations, met Neak Oknha Kith Meng, president of Cambodia Chamber of Commerce (CCC). The purpose of this meeting was to establish formal contact with CCC and explore the business opportunity and potential areas where Philippines businessman could come to invest. PCBC also would like to know the overview of CCC. Gen Jose Magno notified that this was the first official visit to CCC and the delegation accompanying him are the leaderships of PCBC. Since PCBC is under of Philippines Chamber of Commerce, he proposed Neak Oknha Kith Meng to set up Cambodia Philippines Business Council (CPBC) operating under Cambodia Chamber of Commerce. 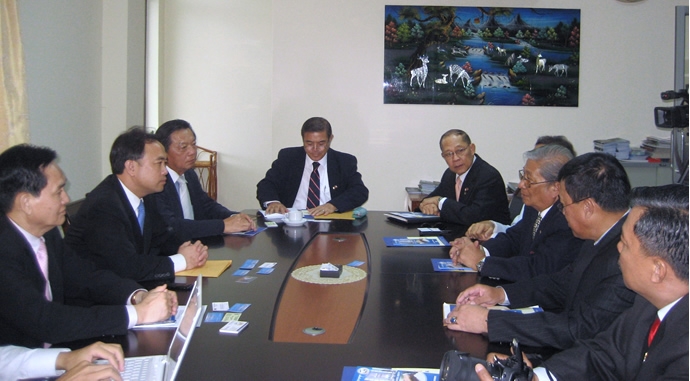 Neak Oknha Kith Meng welcomed the Ambassador and delegation to the CCC and congratulated for having new Philippines president. Then he briefed them on CCC. He noticed that now there are a lot of Philippines businessmen coming to Cambodia. He also used to meet a lot of successful Philippines businessmen. He hoped that both sides would be able to work together and support each other. He agreed with the delegation on setting up a business council under CCC. Now, what he would like to see at the first stage is the direct flight from Philippines to Cambodia. He suggested the delegation to push this process up.

The delay of direct flight is due to the aircraft issue and air market slowdown, said the delegation. However, the legal basis is ready. The delegation informed Neak Oknha that Philippines exhibition and business matching will be held on July 7 to July 10 this year. During that time, they proposed to have MOU signed with CCC on July 7, 2010. In the interim from now until the date of the event, PCBC will send the official letter to Neak Oknha on business areas where Philippines businessmen interested in.

The meeting finished at 1500 in the same date in friendly atmosphere.