Ambassador of Sri Lanka H.E General S.H. Shantha Kottegoda had a courtesy call with Director General of Cambodia Chamber of Commerce (CCC) H.E Nguon Mengtech on October 09, 2014. During the meeting, H.E Ambassador expressed his intent to enhance trade cooperation with Cambodia by increasing interaction between businessmen of both countries. He suggested, initially, Chamber of Commerce should organize business trips to and from both countries so that businessmen get to know each other well and gain trust. There are a lot of areas of cooperation. At the first stage, the focus would be on tourism, jewellery, and agriculture. Sri Lanka Chamber of Commerce would organize a trip to Cambodia by next year. 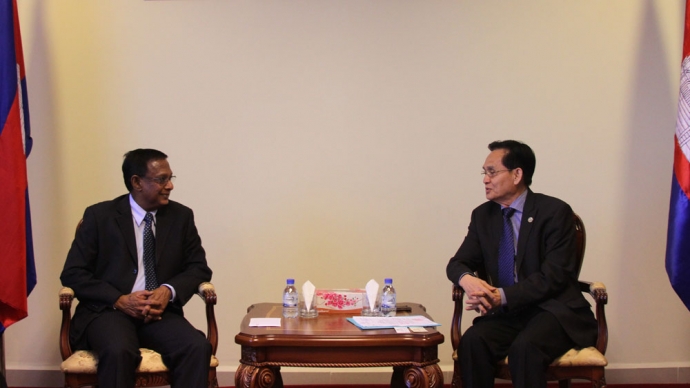 H.E Ngoun Mengtech fully supports Ambassador's intent. He said CCC would also organize a business trip to Sri Lanka after the business matching with Sri Lanka in Cambodia. The tentative time is March next year. To boost the trade interaction among both countries, he requested Ambassador to simplify the Visa process so that Cambodia businessmen could conveniently get Visa from Sri Lanka.